After our momentous arrival in St. John’s, daylight has finally arrived and we leave the hotel, but not before tipping generously the still on-duty, unbelievably helpful concierge. We grab a taxi and head over to the airport. It is still a bit too early as the car rental counters aren’t open yet, so we just sort of sit around looking at brochures and such.

Carla wandered off to find new reading materials and pamphlets, whatever is on the racks for tourists such as her. I, an inveterate snob, no longer consider myself a tourist in Newfoundland. Hey, I’ve been “screeched.” She returns with a small pile of them.

As she’s sifting through them, she comes a cross a large postcard for a beautiful, pastoral looking B&B, photographed in a soft, romantic fog. (By the way, fog can make almost anything and anyplace look good.) She’s smitten by it. “Look at this,” she says. “Oh, this is perfect.” I, being the perfect husband, say “Yes it is. We’re staying there later on the trip.” She thinks I’m joking as I am prone to do. Not this time, I assure her. I’ve booked us there for three nights. As I wrote in the previous post, major points here! Carla’s getting excited. 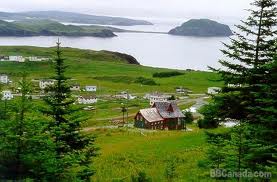 Something to get excited about alright. (bedbreakfasthome.com)

The car rental counter opens, we get our car and head out. As it is still early and we are somewhat famished, we find the nearest Tim Horton‘s and indulge in good coffee and less than nourishing donut-related pastries. Finally, it’s late enough in the morning to find out why there was no room at the inn last night.

We raise the proprietors of our B&B and explain what happened. They check their books and determine that the person who took our reservation booked us for arriving that night. She probably got confused when I told her we were arriving very early that morning. The hosts could not be more apologetic and told us to come right over. They would get a room ready for us to crash in if we wanted to while they got our proper room ready. We got in, crashed and slept well for the next few hours. Our hosts would move all our stuff to the right room while we were out doing whatever we would do.

What we were going to do was get some lunch, show Carla around and meet up later with my photographer friend Randy and his wife Vickie for dinner. Food, drink, and rest are amazing for what they can do for the body and spirit. Thus fortified, we were ready for St. John’s, Newfoundland, and what new adventures were in front of us.

Dinner tonight, road trip tomorrow, and Burin by late afternoon. It’s good to be back.