Sounds sort of like a bad Bruce Lee film, doesn’t it? But, there are no flying fists, no crouching tigers, no leaping lizards, none of that stuff…just good old Newfoundland and its’ people.

I’m now ensconced on the small island of Ramea and have started to walk around the island, it IS small, and photograph. One of the first things I noticed on the ferry on my way in, is a collapsed fish processing plant, a fishery. It collapsed physically, but it is as good as any symbol of what has happened to the fishing industry. I could not have asked for a better opportunity to illustrate what has happened here. But Ramea is so much more than that, though its’ fate remains so tied to it. 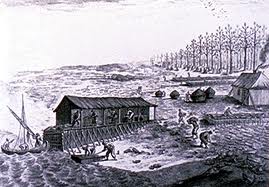 Rendering of a fishery.

As  I mentioned earlier, one passes through a beautiful archipelago on the way in. It was so unexpected as to create a disconnect. “Hello, that number you’re calling is no longer in service.” That’s how I felt. In my modest research over the years, I believed that one found archipelagos in Japan, Indonesia, Scotland even. But Newfoundland, really? Oh, yeah. Yes, Toto, this isn’t Kansas anymore.

Ramea itself is a small, quaint even, little island if not for the oil tank graveyard I was currently photographing. I’ll tell you right now though, there are no photographs of those in this part of this journey. While I tip-toed around the tanks, respectfully trying not to wake them, I came up on a local who in true Newfoundland tradition was more than happy to talk with me. He gave me a little current history of the island and some recommendations: there was an ocean walk to take – check; don’t miss the wind turbine farm – check; Red’s Lounge – check and double check (can’t miss that!); the Anglican Church – check, but on Sunday of course; supermarket – check; and other places that were meaningless to me at the time.

I was into my wandering big time now. As I’ve written earlier, there I was taking pictures of nothing and really loving it.

2 thoughts on “Enter the Wanderer with apologies to Bruce Lee…”